Growing industrial livestock farming is the most significant obstacle to sustainable agriculture worldwide and is a major contributor to deforestation, climate change, land displacement and hunger. Nevertheless, effective changes have long been prevented by the agricultural and food industry and the German Farmers’ Association. Cheap production in ever larger farms with hundreds of thousands of chickens and tens of thousands of pigs is slowing down animal-friendly and ecologically beneficial advances developed by farmers and science. According to the logic of export-oriented slaughterhouses and dairy plants, environmentally and animal-friendly farms that use domestic feed instead of genetically modified feed are becoming unviable.

The Stiftung Zukunftsfähigkeit is taking a stand and supports Germanwatch in its efforts for an environmentally friendly and fair agriculture that protects animals and feeds people. The Germanwatch team World Food, Land Use and Trade is working toward a change in livestock farming with the program ANIMAL PEOPLE RIGHTS: We want to promote an agricultural model that respects animals, health, ecology, and social justice worldwide and counters the misuse of antibiotics. This political work focuses on strengthening small-scale farmers and protecting the environment. 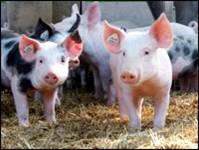 Support new impetus for livestock farming and human rights. Your support enables the Stiftung Zukunftsfähigkeit to allocate funds in a targeted manner and thus ensures the funding of long-term projects that make a real difference.