Please help us with donations to continue supporting Saúl Luciano Lliuya in his fight, especially to cover costs for lawyers, the court and expert witnesses! 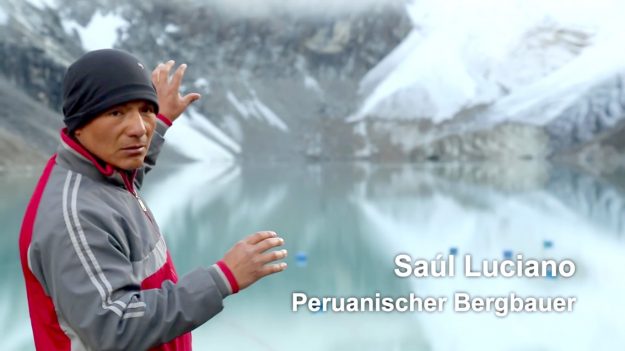 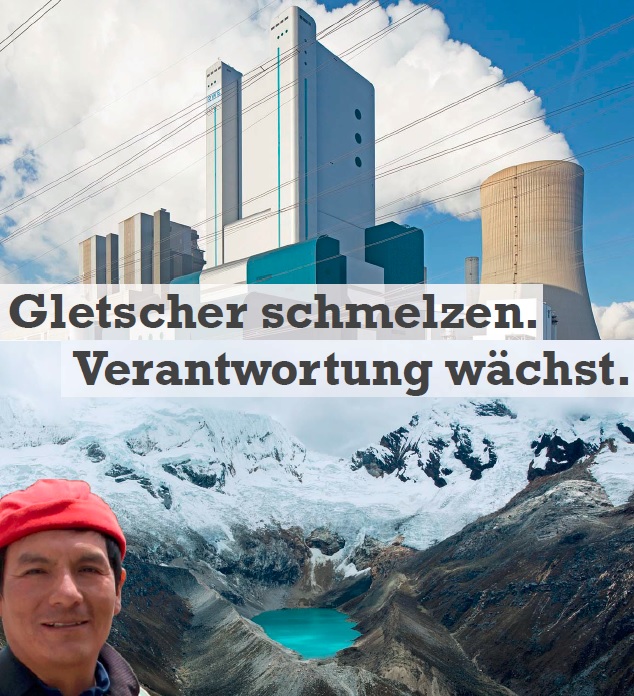 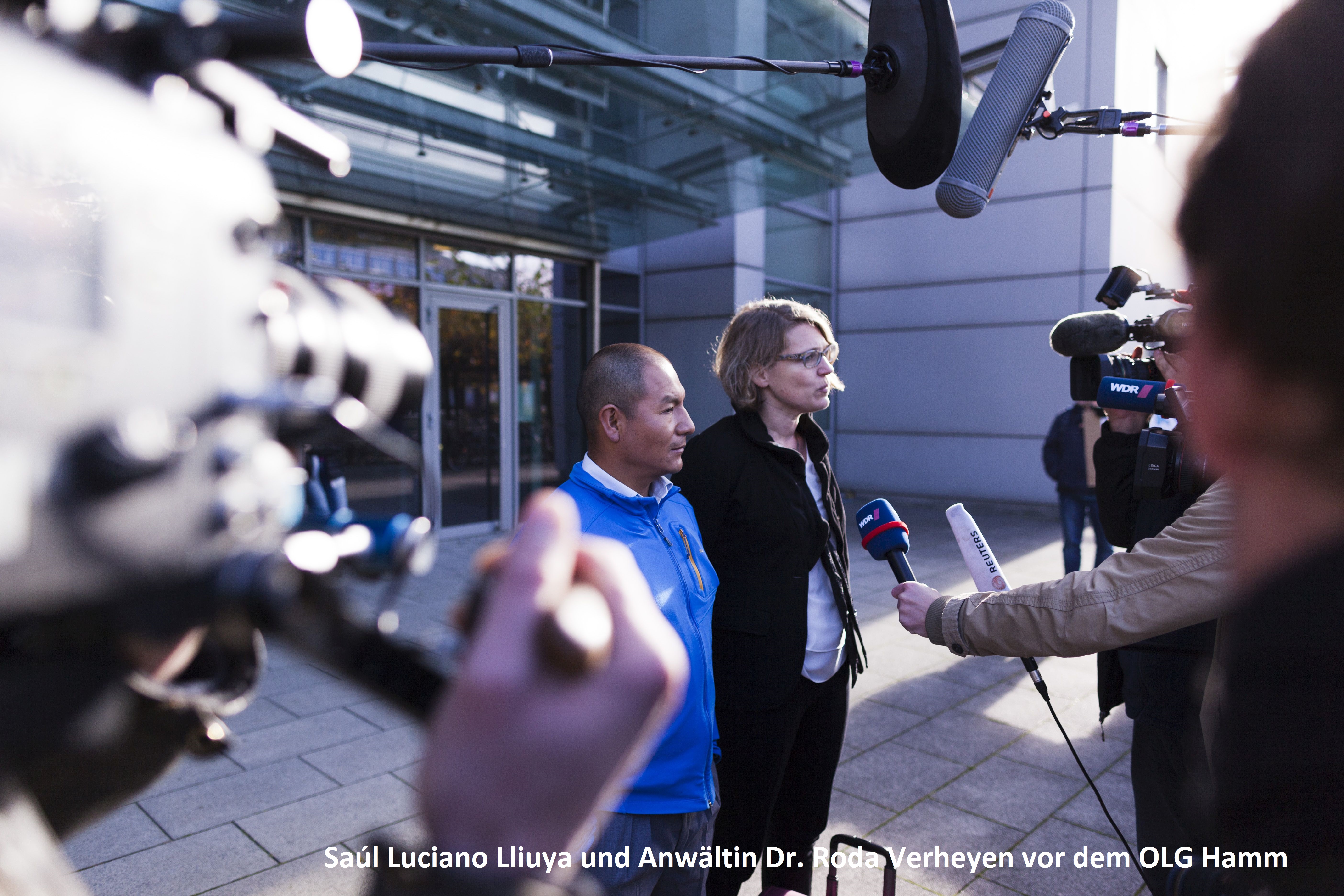 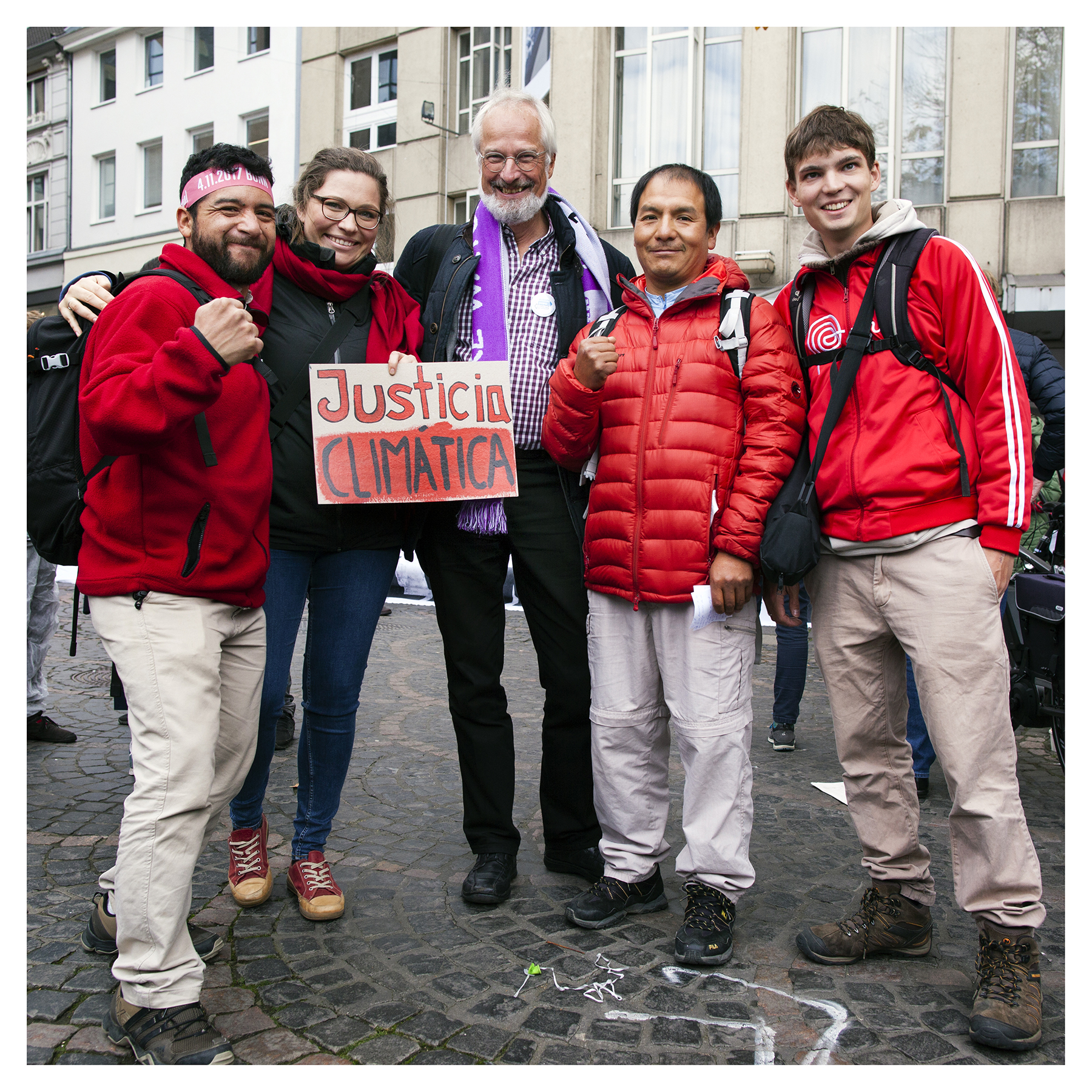 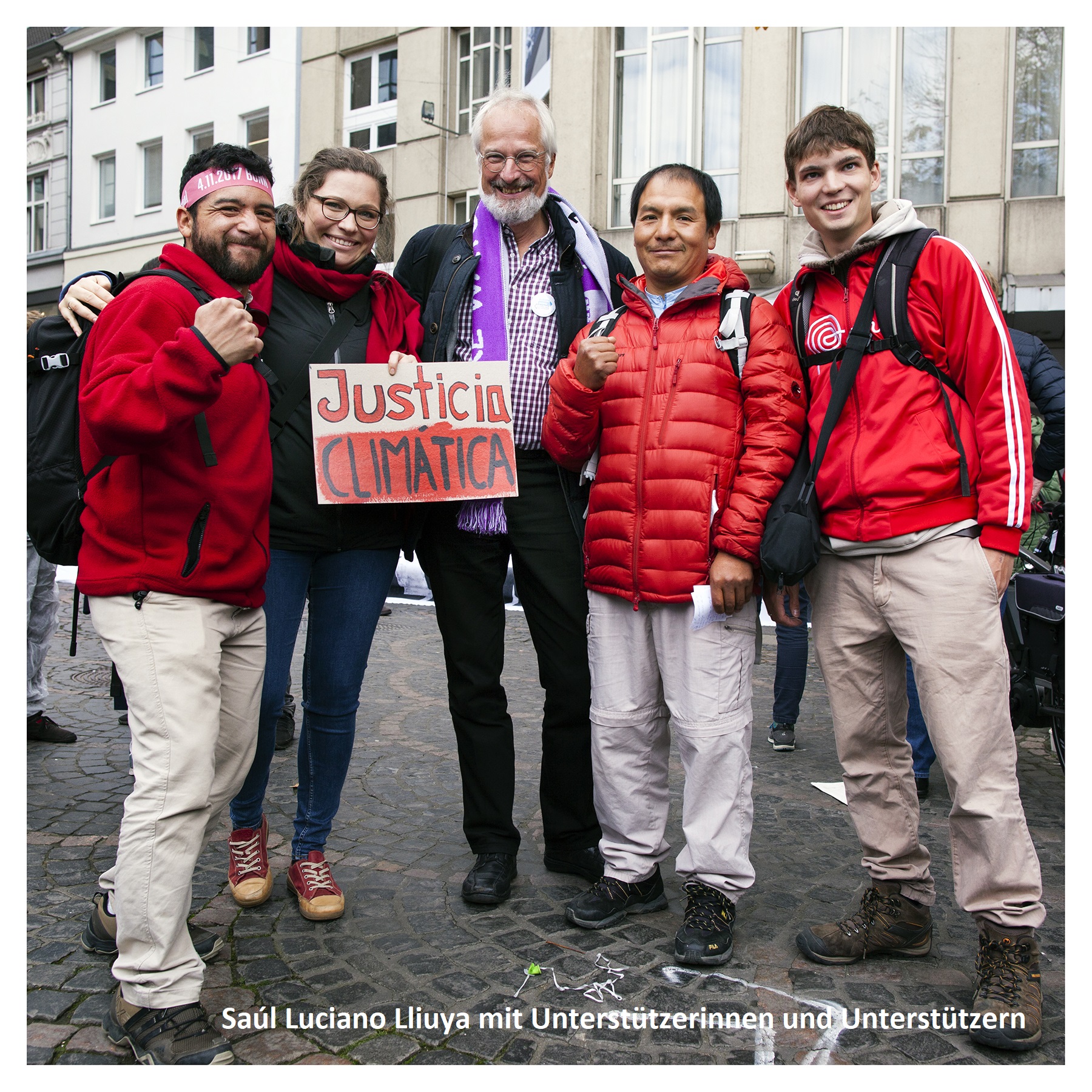 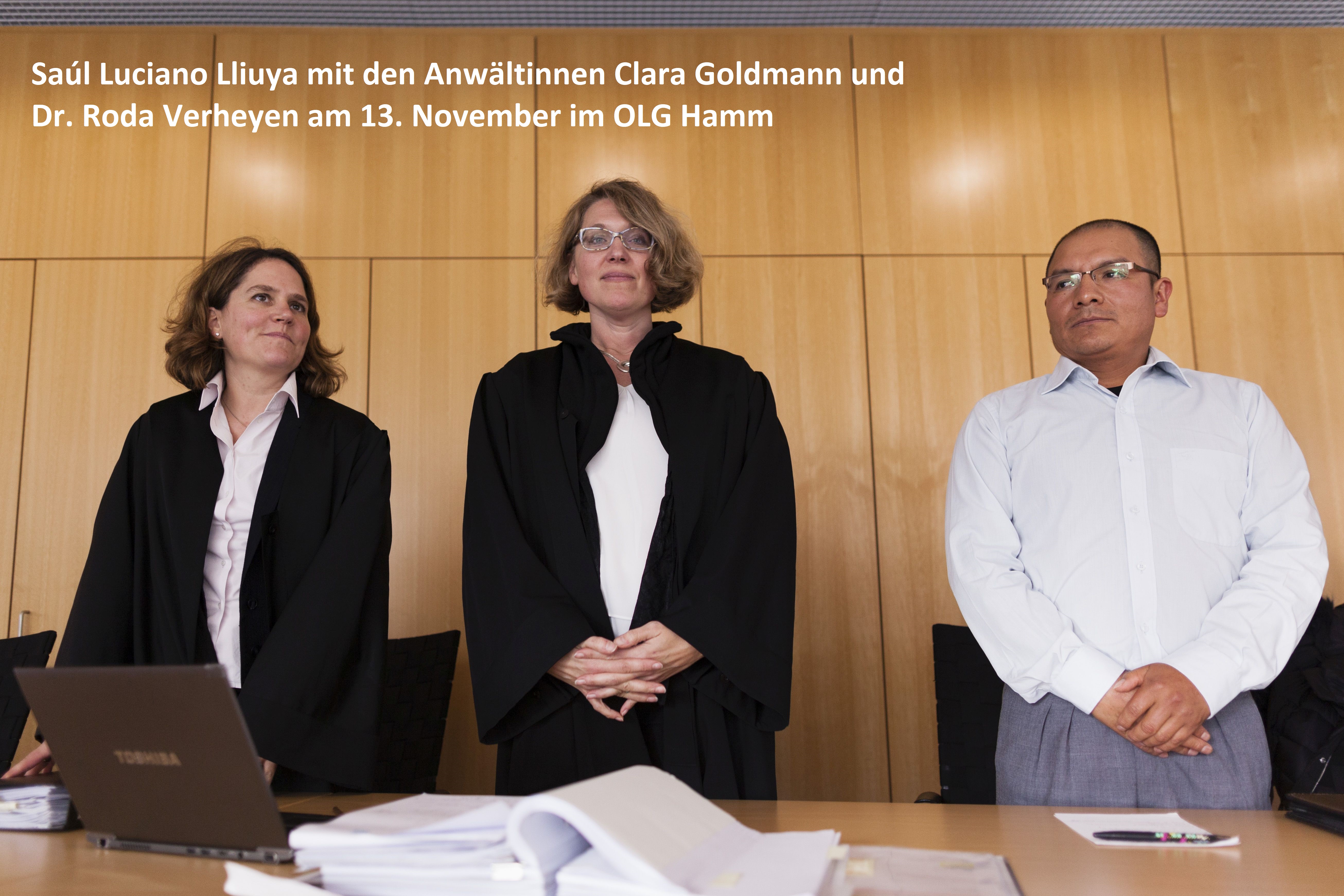 The Andean city of Huaraz (Peru) faces the threat of a flood disaster. This is due to glacial retreat caused by climate change. We support the people there in claiming their right to protection from polluters.

News about the case

Climate case of a Peruvian farmer and mountain guide against German energy company RWE at the Higher Regional Court of Hamm: judges and experts travelled to Peru / experts examined the danger of a possible [...]

The RWE case is finally moving forward: in summer, the Higher Regional Court of Hamm will conduct a site visit to Huaraz. The visit had been delayed since 2019 due to the COVID 19 pandemic. [...]

The Andean city of Huaraz (Peru) faces the threat of a flood disaster. This is due to glacial retreat caused by climate change. We support the people there in claiming their right to protection from polluters. The lawsuit against RWE marks the first time that a person facing severe climate hazards is demanding that one of the largest greenhouse gas emitters in Europe contribute to urgently needed protective measures.

This Factsheet gives you a four-page overview of the background and goals of this legal test case. It also shows how you can support Saúl Luciano Lliuya in his cause.

For detailed background information on the Huaraz case, the lawsuit, and the threat situation, please see the new RWE case website: https://rwe.climatecase.org/en

ABC Australia, 05.07.2020
Podcast: Climate in the Courtroom (Part 1 of 3): Why is this Peruvian farmer suing Germany’s largest power company RWE?

The New York Times Magazine, 09.04.2019
Climate Change Could Destroy His Home in Peru. So He Sued an Energy Company in Germany.

Germanwatch expert Lutz Weischer explains in the TEDx Talk why he thinks Saúl Luciano Lliuya is a superhero.

Together with Germanwatch, the Foundation for Sustainability has been supporting the Peruvian Andean farmer and mountain guide Saúl Luciano Lliuya since 2015 in a civil climate lawsuit against the energy company RWE. Due to glacial retreat caused by climate change, a glacial lake above the Andean city of Huaraz has grown considerably. In the event of an outburst flood, Saúl Luciano Lliuya’s house as well as a large part of the city of Huaraz located below the glacial lake are threatened with a catastrophe that would affect up to 50,000 people. As Europe’s largest CO2 emitter, RWE is responsible for about half a percent of all anthropogenic greenhouse gas emissions worldwide since the beginning of industrialization. Saúl Luciano Lliuya is demanding that the Group pay for around 0.5% of the protective measures required at the glacial lake.

On November 13, 2017, the 5th Civil Senate of the Hamm Higher Regional Court made legal history: Judges found that large emitters such as RWE have a potential obligation to support those affected by climate change impacts in poor countries. This marked the beginning of the evidentiary stage in the claim brought by Saúl Luciano Lliuya against RWE – a great success for this highly regarded test case.

In September 2018, the Hamm Higher Regional Court appointed independent experts to examine the evidence. As a first step, experts will look whether the threat of flooding to the plaintiff’s property can be proven to the legal standard of evidence. If this is established, the next evidentiary question is to what extent climate change and the CO2 emissions released by the defendant’s power plants have contributed to the danger of flooding at Lake Palcacocha.

For the first question of evidence, the court decided to hold an on-site hearing in Huaraz/Peru. And now six and a half years after filing the lawsuit, the climate lawsuit of the Peruvian Andean farmer and mountain guide Saúl Luciano Lliuya against the energy company RWE has entered a decisive phase: After a long delay, in particular due to the Corona pandemic, the court hearing took place at the end of May 2022 in the Andean city of Huaraz and at the glacial lake. Judges of the Higher Regional Court (OLG) of Hamm, legal advisors and experts traveled to Peru to inspect the situation on site and assess the risks from a dam break.

After this stage of taking evidence, the expert opinion and an interim decision in this important test case are now expected soon. We very much hope that due to the high level of attention and the many discussions, the protective measures required at Glacial Lake can finally be started soon.

The dramatic nature of the situation came to the fore on February 5th, 2019 when a large avalanche crashed into the lake and caused waves of 4.5 m. Though an existing 7 m high dam prevented an outburst flood, this demonstrated the ongoing disaster risk to the city of Huaraz as a larger avalanche is possible at any time.

Or directly via Betterplace